Established in 1983, Model Arab League (MAL) is the National Council on U.S.-Arab Relations’ flagship Youth Leadership Development Program. The Models are similar in organization and format to the older and more widely recognized Model United Nations (MUN), with its 193 member states. An important difference between the two is that the MAL focuses only on the 22 member states that comprise the League of Arab States. Established in February 1945, and thereby pre-dating the founding of the United Nations, the Arab League is the world’s oldest regional political organization dedicated to, among other things, the diplomatic and peaceful settlement of disputes.

MAL provides primarily American but also Arab and other international students opportunities to develop invaluable leadership skills. There is no comparable opportunity that allows emerging leaders to learn firsthand what it is like to put themselves in the shoes of real-life Arab diplomats and other foreign affairs practitioners. In the process students come to realize unavoidably and inevitably how different these realities of international relations are in comparison to what they previously thought and wrongly assumed to be true.

Grappling with the international challenges of representing the needs, concerns, interests, and foreign policy objectives of a government other than their own, and especially that of an Arab country, has obvious merit in and of itself. In the process, students not only deepen their knowledge and understanding of the Arab world and its peoples, but they have an extraordinary chance to develop and practice useful analytical, organizational, writing, editing, and public speaking skills. In so doing they strengthen their ability to engage in the art of reasoned argument and spirited debate, and become better prepared to be knowledgeable, well-trained, and effective citizens as well as civic and public affairs leaders. In the process, they have an unparalleled opportunity to hone and refine leadership attributes that for many are often unavailable or otherwise difficult to acquire in the course of reading a book, viewing films, videos, or television, listening to a specialist, participating in academic classes, attending briefings, or accessing blogs and the Internet.

There’s no mistaking either the rarity or the human resource development value of such an enterprise. Arguably few American students and other young adults receive or have received as comprehensive a level of training and firsthand experience as the Models provide in practicing and mastering what it takes to become proficient in public affairs leadership abilities. The more than 2,000 students that annually participate in the National Council’s many annual Model Arab Leagues held in cities throughout the United States are unique in more than nature and number. Performing under the watchful eyes of their faculty advisers and adult judges, the students are eager to prove to themselves, their families, and their teachers that they are worth every penny of the investment made to enable them to participate in — and reap the rewards from — this one-of-a-kind component of their education.

Model Arab League helps prepare students to be knowledgeable, well-trained, and effective citizens as well as civic and public affairs activists. The skill sets acquired and practiced in the course of the Models are designed to serve the participants well regardless of the career or profession they elect to pursue. As longtime MAL Program Coordinators have noted, “We’re providing future leaders the experience of being in the shoes of — and having to deal with — someone they might never understand or be able to deal with effectively otherwise. The beneficiaries are America and the world’s coming generation of diplomats, other international relations specialists, business representatives, and educators as well as humanitarians, peace and justice activists, armed services personnel, and future conflict preventers as well as resolvers.” 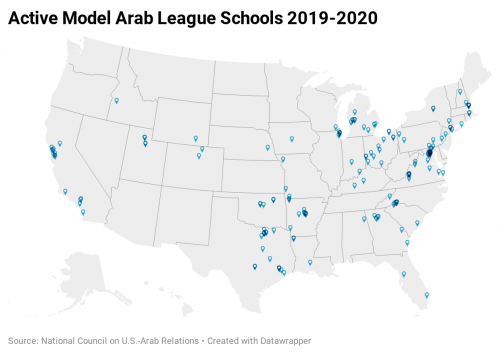