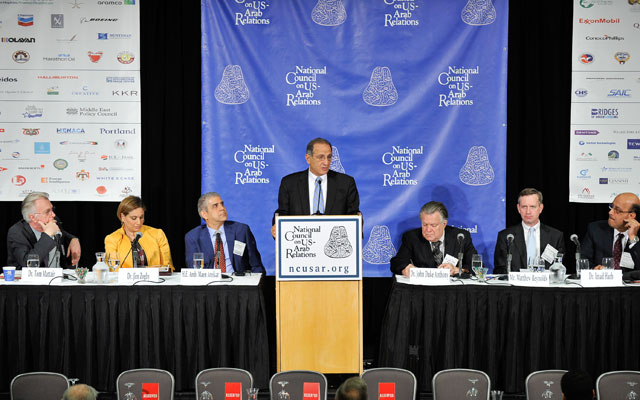 Mr. Mark Perry – Author, Conceived in Liberty, The Last Days of the CIA, and Talking to Terrorists: Why America Must Engage its Enemies.

GEO-POLITICAL DYNAMICS (III):
The Palestinian Future – Impediments to Peace and Possibilities for Progress

H.E. Sameh Shoukry − Ambassador of the Arab Republic of Egypt to the United States.

H.E. Maen Areikat − Representative of the Palestinian Liberation Organization to the United States.

Dr. Thomas Neu − Executive Director, Friends of UNRWA – the United Nations Relief and Works Agency for Palestine; former Middle East Representative for ANERA in the Jerusalem office; formerly with the United States Peace Corps and Save the Children.

Speakers: Dr. Nadia Hijab − Senior Fellow at the Washington, D.C.-based Institute for Palestine Studies. Author, Womanpower: The Arab Debate on Women at Work and co-author Citizens Apart: A Portrait of Palestinians in Israel. She was Editor-in-Chief of the London-based Middle East magazine before moving to New York in 1989 to join the United Nations. Since 1999, she has worked as an independent consultant for international organizations on human rights, human development, gender, and the media.

Mr. Mark Perry, Co-Chair, Conflicts Forum; and author, Four Stars: The Inside Story of the Forty-Year Battle Between the Joint Chiefs of Staff and America’s Civilian Leaders; Eclipse: The Last Days of the CIA; A Fire In Zion: Inside the Israeli-Palestinian Peace Process; Conceived In Liberty, Lift Up Thy Voice: The Grimke Family’s Journey from Slaveholders to Civil Rights Leaders; and Twain and Grant