Mr. Joshua Yaphe – The Energy Transition in the Middle East: The Outlook for 2040

John Duke Anthony – Arabia to Asia: The Myths of an American “Pivot” and Whether or Not There’s a U.S. Strategy Toward the GCC Region 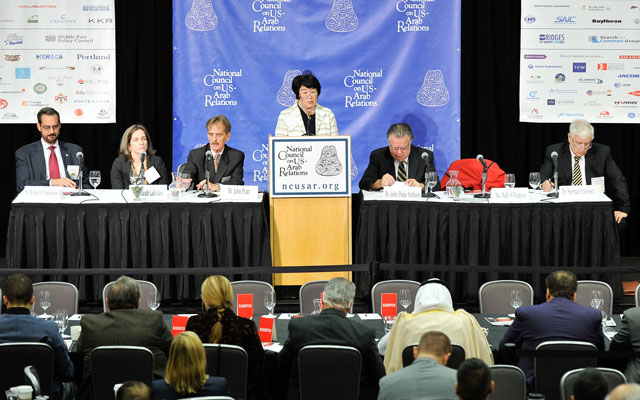 “How might the U.S.-GCC relationship change, if at all, with the United States easing its reliance on Middle Eastern oil in tandem with increases in America’s domestic energy supplies?”

“How is it that the Gulf Cooperation Council (GCC) countries retain good relations with the United States despite regional anti-American sentiment?”

“What aspects of U.S.-GCC cooperation are looked upon favorably by citizens of the Gulf Cooperation Council (GCC) countries?”

His Excellency Dr. Elkalani A. Alsalim, Minister of Finance, Government of Libya

His Excellency Ali Aujali, Ambassador of Libya to the United States

The Arab World and the Future of Global Energy Supply: Realities, Risks, and Prospects from NCUSAR on Vimeo.

Speakers: Ms. Nabilah Al-Tunisi − Director of the Saudi Aramco-Dow Chemical joint venture project to build one of the largest hydrocarbon and chemical complexes in the world near the R’as Tanura Refinery in Saudi Arabia.

Mr. Ryan M. Lance − President, Exploration and Production – Europe, Asia, Africa, and the Middle East, for ConocoPhillips. He serves on the boards of both the American Petroleum Institute and the Independent Petroleum Association of America, is an advisory board member of Montana Tech and a member of the Society of Petroleum Engineers.

Mr. Jay R. Pryor – Vice-President for Corporate Business Development, Chevron Corporation. Mr. Pryor is responsible for identifying and developing new, large-scale business opportunities throughout the world. He assumed his current position in 2006 but began his career with Chevron in 1979.  Since that time he has held a succession of management positions with increasing responsibilities in Asia, the United States, Europe and the former Soviet Union.

John Duke Anthony – Through a Looking Glass Darkly: Perspectives of the U.S.-Gulf Relationship with the Benefit of Hindsight from the Year Before (.pdf)

Moderator: The Hon. James Schlesinger, Chairman of the Board of the MITRE Corporation and Senior Advisor at Lehman Brothers; Consultant to the Departments of Defense, State, and Homeland Security; Member, the Defense Policy Board, the Arms Control and Nonproliferation Advisory Board, and Vice-Chairman of the Homeland Security Advisory Council; former Chairman, Atomic Energy Commission and Director, Central Intelligence Agency; and former Secretary of Defense as well as the nation’s first Secretary of Energy.

Among the senior energy executives represented in the following session are those whose companies are, among other things, major purchasers of Saudi Arabian crude oil, joint venture partners in refining projects in Saudi Arabia and the United States, substantial investors in both countries while pursuing expanded commercial relations and sharing technology to ensure continued reliable long-term energy supplies.