Paul Sullivan – Can Saudi Arabia’s “Vision 2030” Get the Kingdom Off the Oil-Economy Roller Coaster? 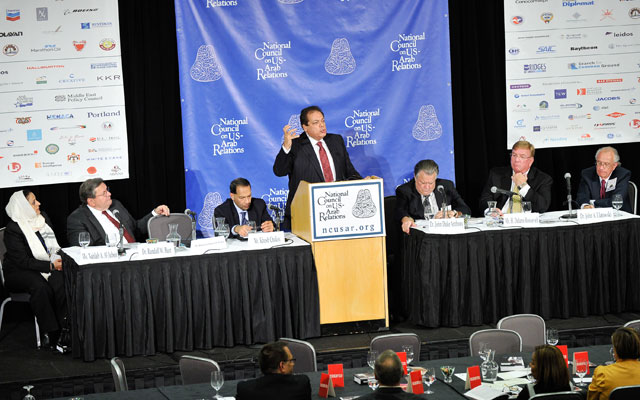 Sesame Workshop shares a common mission with the National Council on U.S.- Arab Relations – to promote awareness, knowledge, and understanding of the Arab countries and the Islamic world. Referring to its work as “Muppet Diplomacy,” Sesame Workshop has been creating captivating youth programming that has reached across divides for over forty years. More than thirty countries, including Egypt, Palestine, and Jordan, have developed local co-productions of Sesame Street. With the help of furry and fuzzy Muppets, these programs reach children by focusing on the unique educational needs of each country – interspersing lessons on basic reading and math with lessons in cooperation, mutual respect, and understanding.

Dr. Landrum Bolling is Director at Large and Senior Advisor to Mercy Corps working out of its Washington, D.C. office. His long career has spanned the academic world − where he was President of Earlham College for fifteen years; the foundation world – where he served as President of the Lilly Endowment, one of the largest grant-making foundations in the world, and Chief Executive Officer of the Council on Foundations; the world of ecumenical relations – where he was Director of the Tantur Ecumenical Institute in Jerusalem; and the world of “non-official” diplomacy – where he has long served as a communications channel between the White House, the State Department, and Palestinian leaders.

Dr. Abdulrahman H. Al-Saeed − Advisor to The Royal Court of the Kingdom of Saudi Arabia and Director, Office of Special Projects for HRH King ‘Abdallah Bin ‘Abdalaziz Al Sa’ud, Custodian of the Two Holy Places and King of Saudi Arabia.

Dr. John Duke Anthony appeared in a roundtable discussion on This is America, a weekly public affairs television series hosted by Dennis Wholey. This is America is distributed throughout the United States, Canada, and the world via PBS stations, the AmericanLife TV Network, and Voice of America Television. The program featured a roundtable discussion on the complex nature of the Arab world with HM Queen Noor; Ambassador Wendy Chamberlin, President of the Middle East Institute; Dr. John Duke Anthony, President and CEO of the National Council on U.S. Arab Relations; George Washington University Islamic Scholar Dr. Sayyed Nasr; Hisham Melham of Al-Arabiya Television; and Laila Al-Qatami, the former communications director for the Arab American Anti-Discrimination Committee.

This is America with Dennis Wholey

Educating Each Other (I): “Arabia’s Challenges and Opportunities”

Educating Each Other (II): “The Human Rights Agenda”

H.E. Houda Ezra Nonoo − Ambassador of the Kingdom of Bahrain to the United States.  In 2006, Ambassador Nonoo was appointed by His Majesty the King, Shaikh Hamad Bin Salman Al Khalifa to the Shura Council; serving on the Committee for Finance and Economic Affairs.

Educating Each Other (III): “Preparing a New Generation of Leaders”