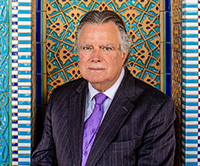 Dr. John Duke Anthony is the Founding President and Chief Executive Officer of the National Council on U.S.-Arab Relations. On June 21, 2000, H.M. King Muhammad VI of Morocco knighted Dr. Anthony, bestowing upon him the Medal of the Order of Ouissam Alaouite, the nation of Morocco's highest award for excellence. His most recent involvement in America's policies toward the Arab region, the Middle East, and the Islamic world was to serve as a Member of the U.S. Department of State Advisory Committee on International Economic Policy's 12-person Subcommittee on Sanctions (with special reference to Iran).

Dr. Anthony is the only American to have been invited to each of the Gulf Cooperation Council's Ministerial and Heads of State Summits since the GCC's inception in 1981. (The GCC is comprised of Bahrain, Kuwait, Oman, Qatar, Saudi Arabia, and the United Arab Emirates).

Since it was launched in 1986, Dr. Anthony has been the chair and lead lecturer in the National Council's Annual 10-Week University Student Summer Internship Program's Academic Seminar on "Arabia and the Gulf."  The focus on this region is because it is the one to which the United States has mobilized and deployed more armed forces than any other place on three separate occasions in the past thirty-nine years.  An additional reason is because it is here that hundreds of thousands of Americans have contributed much in the way of lives and treasure in pursuit of innumerable, well-intentioned, people-oriented projects.  It is also because it is here that, against great odds, they have endeavored to ensure the region's security and stability, without which there can be no realistic prospect for prosperity.  But  accompanying these efforts unfortunately has been a different set of realities.  Indeed, millions in this region hold the United States responsible, directly or indirectly, for the creation of ISIS; for more people being wounded; for more people being maimed for life; for more people being made refugees and having to live in tents or other temporary shelters; for more people being made widows, widowers, and orphans; for more people being internally displaced and rendered homeless; for more people being provoked, antagonized, and humiliated; for more people than ever before believing they have ample reason to be anti-American and anti-Western; and for more Palestinian Arab Christians and Muslims, more Iraqi and Syrian Kurds, and more Israeli Jews having their dreams shattered than anyplace else on earth.

For the past 50 years, Dr. Anthony has also been a consultant and regular lecturer on the Arabian Peninsula and the Gulf for the Departments of Defense and State.  Dr. Anthony is former Chair, Near East and North Africa Program, Foreign Service Institute, U.S. Department of State as well as former Founding Chair of the Department's Advanced Arabian Peninsula Studies Seminar – the U.S. government's leading educational programs preparing select leading American diplomatic and defense personnel assigned to countries in Arabia and the Gulf.

A Life Member of the Council on Foreign Relations since 1986, Dr. Anthony has been a frequent participant in its study groups and seminars on issues relating to the Arabian Peninsula and Gulf regions, Syria, and the broader Arab and Islamic world.  In addition to serving as a director of cultural immersion programs for Americans in Egypt, Greece, Iran, Jordan, Lebanon, and Turkey, he has served as an Associate Professor, Visiting Professor, and/or Adjunct Professor at the American University in Cairo; Georgetown University's Center for Contemporary Arab Studies in the Edmund A. Walsh School of Foreign Service; the Johns Hopkins University School of Advanced International Studies; the Oxford Centre for Islamic Studies; the Universities of Pennsylvania, Virginia, and Texas; the U.S. Naval Postgraduate School; the U.S. Joint Intelligence College; and the Virginia Military Institute. At Wright-Patterson Air Force Base, Dr. Anthony continues to serve as an Adjunct Professor at the Defense Institute of Security Cooperation Studies (formerly known as the Defense Institute of Security Assistance Management).

In 1983, Dr. Anthony received the U.S. Department of Defense Institute of Security Assistance Management's Distinguished Achievement Award, one of three granted to American Middle East specialists in the Institute's history. In 1989, the Kappa Alpha Order's National Executive bestowed upon him its Distinguished Public Service Award for Excellence "through a strenuous and useful Life of Service to others." In 1993, Dr. Anthony received the U.S. Department of State's Distinguished Visiting Lecturer Award, one of three awarded over a span of a quarter century, in recognition of his preparation of American diplomatic and defense personnel assigned to the Arabian Peninsula and the Gulf states. In 1994, he received the Stevens Award for Outstanding Contributions to American-Arab Understanding. In 2008, the Washington, D.C. Rotary Club bestowed upon him its first-ever Local Giant Leadership Award. In 2014, he was awarded the American-Arab Anti-Discrimination Committee's Distinguished Service Award at ADC's Annual Convention.

In March 2017, U.S. Senator Pat Roberts, Chair, and General (Ret.) P.X. Kelly, Co-Chair, appointed Dr. Anthony to the President Dwight D. Eisenhower Memorial Advisory Committee. The appointment, they emphasized, "signals our gratitude for your unique insights and support," adding that "you join as fellow members celebrated patriotic leaders Senator Bob Dole, Tom Brokaw, Tom Hanks, and former Secretary of State James. Baker." In May 2018, Dr. Anthony was recognized by the Embassy of the Sultanate of Oman in Washington, D.C. at their Fifth Annual Ramadan Iftar Celebration. The recognition singled out Dr. Anthony's 53 visits to the Sultanate that underscored his special contributions as an educator and practitioner of private sector diplomacy regarding the Arab countries, the Middle East, and the Islamic world.

Dr. Anthony is the only American to have been awarded a Fulbright Fellowship and permitted to conduct political research in the former People's Democratic Republic of Yemen (1969-1970), then led by the only Marxist-Leninist government in Arab and Islamic history.  This led to his being cosponsored by the British Ministry of Foreign Affairs and the U.S. Department of State as the sole American scholar allowed to observe at firsthand the process by which Britain proceeded to abrogate its longstanding treaty obligations to administer the defense and foreign relations for nine Arab states lining the coastal regions of eastern Arabia and the Gulf.

Since 1986 and continuing to the present, Dr. Anthony has accompanied more than 200 Members of Congress, their chiefs of staff, defense and foreign affairs advisers, and legislative and communications directors, together with Attorneys General, Lieutenant Governors, and Presidents and Directors of World Affairs councils, on fact-finding missions to Bahrain, Egypt, Iraq, Jordan, Kuwait, Morocco, Oman, Qatar, the United Arab Emirates, and Yemen. From 1996 to the present, he has also served as the principal scholar-escort for delegations to various GCC countries, Egypt, and Yemen comprised of 158 officers assigned to the staff of successive Commanding Generals of the U.S. Central Command.

Dr. Anthony's best-known works are Arab States of The Lower Gulf: People, Politics, Petroleum; The Middle East: Oil, Politics, and Development (editor and co-author); and, together with J. E. Peterson, Historical and Cultural Dictionary of The Sultanate of Oman and The Emirates of Eastern Arabia.  His firsthand reports of the GCC's Annual Ministerial and Heads of State Summits exceed those of any other scholar.  He has also published more than 180 articles, essays, and monographs on a variety of topics related to the Arab region and specific Arab countries as well as America's interests and involvement in the Arab countries, the Middle East, and the Islamic world. For sixteen years, Dr. Anthony was the annual author of the essays on "Oman" and "Qatar" for the Encyclopedia Britannica Year in Review, the world's oldest continuously published encyclopedia in English.

In addition to being the founder of the Annual Arab-U.S. Policymakers Conference, Dr. Anthony has also been co-founder and board member of the National Commission to Commemorate the 14th Centennial of Islam; a founder, board member, and Secretary of the U.S.-GCC Corporate Cooperation Committee; founding President of the Middle East Educational Trust; co-founder of the Commission on Israeli-Palestinian Peace; founding President of the Society for Gulf Arab Studies; and founder and former chairman of the U.S.-Morocco Affairs Council.

After the completion of his U.S. Army active duty military service, the Commonwealth of Virginia granted Dr. Anthony a four-year, all-expenses State Cadetship Award, which allowed him to enroll at Virginia Military Institute (VMI), where he received his Bachelor's Degree in History. At VMI, he was elected president of his class all four years in addition to serving as president of the Corps of Cadets' governing bodies during his First Class (Senior) Year. He subsequently earned a Master of Science Degree in Foreign Service (With Distinction) from the Edmund A. Walsh Graduate School of Foreign Service at Georgetown University, where, in addition to holding one of only three University Scholar Awards, he was inducted into the National Political Science Honor Society.

Dr. Anthony holds a Ph.D. in International Relations and Middle East Studies from the Johns Hopkins University School of Advanced International Studies (SAIS) in Washington, D.C., where he held a National Defense in Foreign Language Scholarship for Arabic, was awarded a Fulbright Fellowship, and was appointed to SAIS' full time faculty in 1973 while still a student.   He passed his proficiency exam in French at the Georgetown University's School of Foreign Service in 1966 and his proficiency exam in Arabic at the Johns Hopkins University School of Advanced International Studies in 1969 following study there as well as at Princeton University and the American University in Cairo's Center for Arabic Study Abroad.