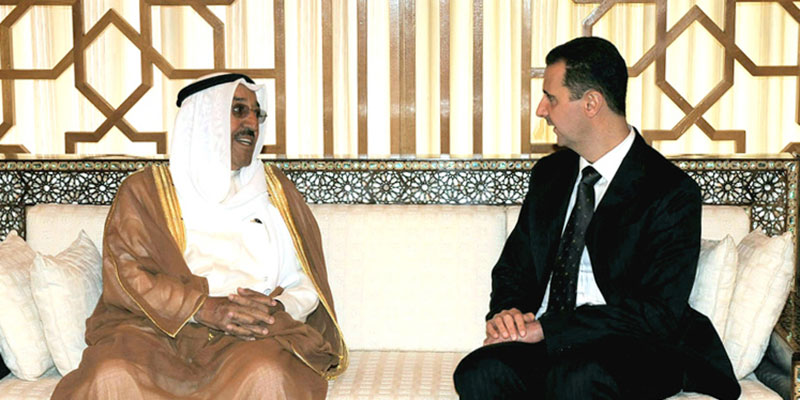 In pursuit of its educational mission, the National Council works to serve as an information clearinghouse. It is in this spirit that it provides the following essay. It does so as a public service. The author, Giorgio Cafiero, is the Founder and CEO of Gulf State Analytics. Mr. Cafiero is a keen observer and analyst of matters pertaining to the Arab region, the Middle East, and the Islamic world.

This particular essay has to do with two countries with which the National Council has long been associated, namely Kuwait and Syria. From the onset of the 1990-1991 Kuwait Crisis, when its vastly larger and more heavily armed northern neighbor smashed to smithereens Kuwait’s national sovereignty, political independence, and territorial integrity, no U.S. non-governmental organization was more closely associated with America’s nationwide Free Kuwait Campaign than the Council.

The National Council’s leadership was on the first civilian aircraft to land in Kuwait upon its liberation. In addition, each month following the restoration of its security, the Council organized and led delegations of American leaders to Kuwait to see for themselves the immense damage inflicted upon the country’s infrastructure, economy, and people.

Syria, an eastern Mediterranean country, is vastly different. It is the home of cultures and civilizations that birthed the internationally more renowned Greco-Roman civilizations. Its Christian, Jewish, and Muslim roots are, arguably, deeper, vaster, and more diverse than any other country. Its links to Lebanon, Palestine, Iraq, and Jordan, and the water and agriculturally rich Golan Province that Israel has illegally occupied since 1967, have long rendered it inextricably intertwined with the region’s geopolitics.

To no other Arab country has the National Council organized and escorted more delegations of American Congressional, academic, and student leaders – approximately 400 all totaled – than Syria. Each has returned enamored with the extraordinary richness of the country’s culture, its contributions to world civilizations, and the enormous importance which more than a million Americans of Syrian ancestry attach to their ancestral homeland.

As should be clear from anyone who reads the mainstream media, few countries are at once as important to the United States, the region in which they are situated, and the world beyond, or as little understood, as Kuwait and Syria. As is clear from what Mr. Cafiero has to say about Kuwait’s policies and positions regarding Syria, he does not shy away from addressing some of the more complex and controversial issues of the day as they pertain to both countries.

Almost 12 years after the Arab Spring erupted in Syria, sensitive questions surrounding the (il)legitimacy of President Bashar al-Assad and his regime divide Gulf Cooperation Council (GCC) members. The United Arab Emirates (UAE), Bahrain, and Oman favor bringing Syria back into the Arab League, and shoring up regional and international support for Damascus. However, as the GCC states most supportive of regime change at earlier stages of the Syrian crisis, Qatar and Saudi Arabia remain opposed to any moves aimed at rehabilitating Assad.

It is worth asking where Kuwait stands on this issue. Like most GCC states, Kuwait’s relationship with Syria quickly deteriorated after Syria’s Arab Spring protests picked up and the Assad regime resorted to lethal violence to crush the uprising. In December 2012, Kuwait closed its embassy in Damascus. During the previous year, Kuwait was the sole GCC state which refused to criminalize terrorist finance, resulting in the Gulf country becoming a hub for Kuwaitis and non-Kuwaitis to send donations to armed groups fighting Assad’s government.

Nonetheless, by 2014 there was a restoration of diplomatic ties at the chargés d’affaires level and Kuwait opened consular services for the 140,000 Syrians living in the Gulf country. In 2019, bilateral relations partially thawed. Still, there has yet to be a full rapprochement between the two Arab governments.

It is important to take stock of the history of Kuwaiti-Syrian relations, which were particularly warm in the 1990-2011 period. Of all GCC states, Kuwait was perhaps closest to Syria throughout the two decades preceding the Arab Spring.

“The reason behind such strong relations could be traced back to the Assad government’s position towards the 1990 Iraqi invasion of Kuwait and Damascus’ role in Kuwait’s liberation. Relations peaked under Sabah Al-Ahmad’s tenure,” said Dr Talal Mohammad, Consultant in Government Affairs, Geopolitics, and Strategic Intelligence, as well as an Academic Visitor at St Antony’s College, University of Oxford, in a conversation with the National Council on U.S.-Arab Relations. “It can be argued that Bashar’s invitation to attend the 10th and 20th anniversaries of the liberation of Kuwait in 2001 and 2011, respectively, being one of a select few leaders that were invited, [was] a case in point of the close ties between both states.”

Yet, Kuwait, which is committed to regional cooperation via the GCC and Arab League, has clarified that it will not fully renormalize diplomatic relations with Assad’s government unless and until the Arab League decides to reaccept Syria’s regime back into the body.

“Kuwait has always balanced its relations with its regional Gulf neighbors, mostly following a consensus and joint decision through the GCC,” explained Dr. Mohammad. “In the case of Syria, I think that Kuwait will wait until a joint decision is made, particularly since it takes Saudi Arabia’s regional weight into account.”

Kuwait stands out as what has been described as the GCC’s only semi-democracy. Consequently, the Kuwaiti leadership must be especially sensitive to public opinion when making decisions on delicate foreign policy issues.

“More than any other Gulf state, Kuwait was popularly mobilized in support of the popular uprising in Syria. For that reason, it would be extremely unpopular for any head of state in Kuwait to normalize relations with the Assad regime and given Kuwait’s parliamentary government I think it would be politically untenable to do that,” Dr. Kristin Smith Diwan, a Senior Resident Scholar at the Arab Gulf States Institute in Washington, told the National Council.

The Kuwaiti leadership must be especially sensitive to public opinion when making decisions on delicate foreign policy issues.

Nonetheless, in contrast to the debate over normalizing relations with Israel, there is no consensus among Kuwaitis on the Syrian file. The question of reestablishing full-fledged diplomatic relations with Assad’s regime (or not) divides Kuwaitis largely along sectarian and ideological lines.

“The Shi’a in Kuwait have always favored relations with Syria, particularly since they visit Damascus for ‘religious tourism’ as Syria is home to the mausoleums of two members of the Ahlulbayt [members of the Prophet Mohammad’s (PBUH) family], namely Sayyidah Zaynab and Sayyidah Ruqaya, the sister and daughter of Imam Hussain respectively,” according to Dr. Mohammad.

Shi’a lawmakers in Kuwait’s National Assembly, including former MP Abdulhameed Dashti, responded to the Syrian crisis with firmly pro-Assad stances, strongly condemning the Sunni-dominated Syrian opposition. On numerous occasions, Dashti voiced support for Hezbollah while opposing Saudi- and Emirati-led interventions in Bahrain and Yemen. He also “insulted” Saudi Arabia on a Syrian TV channel, resulting in him being sentenced to prison in absentia.

Yet, among Kuwait’s Sunni Islamists are those who oppose further reconciliation with Damascus. At various points throughout the Syrian civil war, sitting and former members of the Kuwaiti parliament such as Jamaan al-Herbish of Hadas (the Kuwaiti branch of the Muslim Brotherhood) and Ahmad al-Shahoomi joined protesters outside Russia’s embassy in Kuwait City in response to Moscow’s support for Assad’s regime. Al-Shahoomi called the 2016 siege of Aleppo a “battle against Sunni Islam.”

The question of reestablishing full-fledged diplomatic relations with Assad’s regime (or not) divides Kuwaitis largely along sectarian and ideological lines.

Among Kuwait’s Sunni Islamists, there have been perceptions of Syria’s government functioning as Iran’s proxy. “Any normalization with the Assad regime according to [Kuwait’s Sunni Islamists] would be viewed as a victory for Iran, further emboldening Tehran’s regional position and ‘power.’ The participation and support of the Sunni Islamists, particularly the Muslim Brotherhood and Salafists, was noticeable during the Arab Spring protests,” observed Dr. Mohammed.

“Islamists such as Waleed Tabtaba’I, Shafi al-Ajmi, and Hajjaj al-Ajmi visited Syria, with the latter holding protests explicitly celebrating the armed Salafist-Wahhabi aligned factions of the Free Syrian Army’s activities in Syria’s armed opposition, in addition to being sanctioned by the United States Department of Treasury for [arming] factions of the Syrian opposition.”

Before the conflict in Syria broke out, Kuwait and Syria maintained a strong economic relationship. In the pre-Arab Spring period, there were Kuwaiti investors in Syria. Just before the crisis erupted in 2011, the Kuwaiti Chamber of Commerce sought to boost Kuwait’s role in Syria’s economy, specifically through plans to invest in a new residential city outside the Syrian capital that had that potential to create tens of thousands of new jobs.

Today, Syria effectively functions as a highly sanctioned narco-state. Kuwait does not currently have serious plans for restoring its once important economic role in Syria. “My sense is that there are no great economic interests at this point, or none that would be from a constituency that could really sway the overall policy of the state,” said Dr. Diwan.

“Today, business between Kuwait and Syria is on a personal level with no government influence on investments. In a recent meeting, I was informed that Syria today was run by oligarchs and Kuwaitis would not be able to regulate nor be able to have efficient oversight over their investments and any state economic interests,” Dr. Mohammad remarked to National Council.

It is not easy to predict if or when Kuwait will follow in the footsteps of other Arab states that have decided to let bygones be bygones with Damascus. Although some Arab capitals, Moscow, and Tehran might try to pressure Kuwait to make such a move, it is important to recognize the importance of Washington and Riyadh’s influence on this front.

It is not easy to predict if or when Kuwait will follow in the footsteps of other Arab states that have decided to let bygones be bygones with Damascus.

The question of whether to renormalize relations with Assad’s regime will probably remain a delicate one in Kuwait—one that Kuwaiti officials will “duck as long as they can” predicts Dr. Diwan. “I don’t expect that pressure from the Arab League would be successful unless we had a wholesale shift from all the Arab states and the United States.”

Ultimately, it is safe to bet that Kuwait will wait to fully reconcile with Syria until there is a broad consensus in the GCC and Arab League, meaning that Kuwait will remain sensitive to Saudi Arabia’s position on this file. Put simply, Kuwait’s re-embrace of Assad’s regime would probably only occur after there is a green light from Riyadh, which might not come in the immediate future.

Mr. Giorgio Cafiero is the CEO and Founder of Gulf State Analytics, a Washington, D.C.-based geopolitical risk consultancy. He is also an Adjunct Fellow at the American Security Project. Mr. Cafiero has written for a variety of public policy research institutions and media outlets including Gulf International Forum, Atlantic Council, Carnegie Endowment for International Peace, The New Arab, Al Jazeera English, and TRT World. View all posts by Giorgio Cafiero